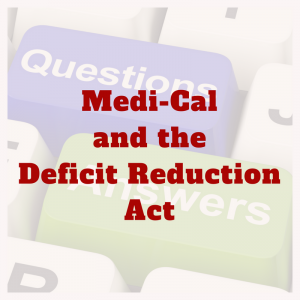 Recently I have worked with many clients who have expressed concerns about when California will implement the Deficit Reduction Act of 2005 (DRA).  The DRA was signed into Federal law on February 8, 2006.  The Federal government then told the individual states to update their Medicaid laws to conform with the DRA.  Currently California has not yet implemented the changes that would bring Medi-Cal (California’s implementation of Medicaid) into compliance with the DRA.

Example 2: Now let us consider the same example but assume California implements the DRA.  Mary makes the $1,000,000 gift of stock to her son as of January 1, 2018.  Then on July 1, 2020, Mary applies for Medi-Cal.  The 60 month look-back period would allow Medi-Cal to see that the gift was made 30 months ago, well within the 60-month review period.  Medi-Cal would then disqualify Mary from receiving Medi-Cal for up to 60 months.  However, rather than apply the Medi-Cal disqualification from the time of the gift, now Mary is disqualified from the time of her Medi-Cal application.  That means that Mary could be disqualified for receiving Medi-Cal until July 1, 2025.

The DRA is not currently in effect in California and Medi-Cal still uses the 30-month look back period.  SB 483 (Kuehl) signed by the Governor on September 27, 2008, imposes protections on the California implementation of the DRA, including that once implemented the DRA will not be retroactive.  “It is the intent of the Legislature that the provisions of this section shall apply prospectively to any individual to whom the act applies commencing from the date regulations adopted pursuant to this act are filed with the Secretary of State.”  Returning to Example 1, if the DRA was implemented in California as of July 1, 2020, Mary would not be retroactively disqualified for Medi-Cal because her gift was made while California was still using the 30-month look back period.

If you want to learn more about Medi-Cal, what assets are exempt for Medi-Cal eligibility purposes and strategies to protect your assets (both before and after the implementation of the DRA), please attend one of our upcoming Medi-Cal planning workshops.