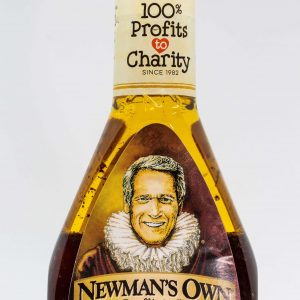 Paul Newman, famous actor turned entrepreneur, died in 2008. Prior to his death, Newman created Newman’s Own, a company that began by making and selling salad dressing and expanded into other food products. Newman wanted to give away all profits generated from Newman’s Own to charitable causes by creating Newman’s Own Foundation (the “Foundation”), the parent company of Newman’s Own. Several years before his death, Newman’s attorney drafted a letter of intent memorializing Newman’s intention to give his children the major voice in distributing funds for charity which Newman later reiterated at least twice in the years just prior to his passing. In a surprising move, however, a mere two months before his death, Newman updated his estate plan and named two associates, rather than his children, to control the Foundation. In response to multiple purported misdeeds by the associates, as members and directors of the Foundation, his daughters, Susan Kendall Newman, and Nell Newman, just filed a lawsuit seeking $1.6 million in damages in a Connecticut state court.

Charitable causes were important to Newman during his life. He pledged $1 million to open a recovery center in his predeceased son’s name after his son died from a drug and alcohol overdose in 1978. Interestingly, in 2011, the Foundation stopped funding to the center, and it closed shortly thereafter. In 1982 Newman famously said “let’s give it all away” with respect to the profits generated by Newman’s Own. The company’s website indicates that it gives 100% of the profits away each year and has donated more than $570 million worldwide since 1982. Charitable giving was so important to Newman that during his life, he charged his daughters with making charitable donations to organizations that supported education, health, the environment, arts and culture, international affairs, emergency relief, animal welfare, and scientific and human services. Newman planned for those distributions to continue after his death. While it’s clear that contributions have continued, it’s unclear whether they have occurred as Newman envisioned.

Susan and Nell’s lawsuit declares that by eliminating awards to organizations focusing on arts, climate change, and the environment in favor of other sectors, the Foundation has abandoned its founder’s recommendations. The lawsuit further alleges that the Foundation improperly reduced the mandated contributions to charitable entities designated by the daughters. Newman’s Estate Planning documents granted the Foundation publicity and intellectual property rights if it continued a $400,000 annual disbursement to each of his five daughters. Reportedly, each daughter was to take a “reasonable salary” from those funds and distribute the remainder to charities they chose. After several years of these payments, the Foundation decided unilaterally to cut that payment in half. The lawsuit maintains that the reduction in allocations fails to comport with Newman’s stated intent. The complaint asserts improper behavior by one of the directors, including enjoying prohibited perks. Finally, the daughters claim that Newman set up his estate while incapacitated and subject to undue influence. In support of these allegations, they contend that Newman intended to give them control of the Foundation by making them successor members or giving them seats on the board of directors and cite the letter of intent and its verbal confirmations. As indicated above, though, Newman’s plan failed to do that. Instead, Newman appointed long-time advisors as members and directors of the Foundation and vested them with ultimate decision-making authority.

Newman’s daughters face an uphill battle. First, undue influence and lack of capacity claims rarely succeed. Plaintiffs in these cases often have trouble meeting the high burden of proof. Second, while Newman’s comprehensive pour-over Will contained provisions about what was to happen to his tangible assets, corporate interests, and intellectual property rights, it failed to reveal any details about his intangible assets or the provisions of his trust. It’s clear, however, that he engaged an attorney’s services to complete the plan. Third, while the daughters claim that their father intended them to have more control over distributions to charities and he signed a letter of intent to that effect during his life, his final plan failed to name either daughter as a member or director of the Foundation, thereby depriving the daughters of the power they seek. Had Newman intended for the daughters to control distributions, he could have and should have made it clear in the documents he signed just prior to his death.

The daughters intend to donate the funds sought to their foundations for charitable giving. It’ll be interesting to see whether the court imposes the constructive trust that Newman’s daughters seek. Incapacity and undue influence are among the hardest cases to prove. Unfortunately, disputes often arise over family foundations and Estate Plans in general. Estate Planning practitioners can help avoid those disputes for clients by guiding them to create a clear plan and communicating that plan to their family. In any context in which the clients want to involve future generations, it’s better to set that up earlier rather than later. That gives the clients time to work together toward the common stated goals. Finally, the biggest lesson for all Estate Planning professionals and clients: it’s better to let loved ones know of your Estate Plan prior to death. While it’s certainly not required, it helps everyone understand your reasons and goes a long way in preventing hurt feelings and unnecessary litigation after death.