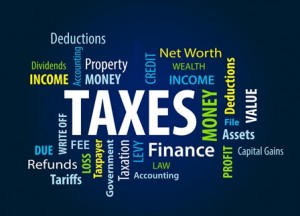 There are many changes for 2018. Congress passed a last-minute tax law, which the President signed the last business day before the Holidays.

In late December, the Senate passed the new tax law, (which had been called the “Tax Cuts and Jobs Act” and due to Senate parliamentarian objections is now ‘An Act to provide for reconciliation pursuant to titles II and V of the concurrent resolution on the budget for fiscal year 2018”) and then the House of Representatives passed it in its final form. (The House had passed a prior version which had to be revised in the Senate.) The President signed the legislation on the last business day before the Holidays. The changes are generally effective January 1, 2018. The provisions relating to individual taxpayers, including those relating to estate, gift, and generation-skipping taxes all sunset after December 31, 2025, with the law reverting to prior law.

Here are the significant changes of interest with regard to estate planning:

The Estate and gift tax exemption is doubled. The basic exclusion amount increases from $5 million to $10 million, adjusted for inflation after 2011. In 2018, the exclusion will be $11.18 million per person. So, a couple could pass $22.36 million free from tax.

The Generation-Skipping Transfer tax exemption is still tied to the Estate and Gift tax exemption. So, it too doubles from $5 million to $10 million with inflation adjustment after 2011. The GST exemption will be $11.18 million in 2018.

The step-up in basis remains unaffected by the new legislation.

The number of brackets remains the same, but some rates are lowering.

Here are the new brackets:

Alternative minimum tax remains for individuals, but the exemption increases. (The AMT is eliminated for corporations.)

Interest on a home mortgage for a first or second residence had been deductible up to $1 million in debt (adjusted from inflation). Under the new law, the mortgage must be no larger than $750,000 for the interest to be deductible. Existing mortgages are grandfathered and may be refinanced.

The penalty for not having health insurance is removed.

Various amounts in the tax code are indexed for inflation. The method of indexing has been changed to chained-CPI, which will raise levels more slowly than in the past.

Income from pass-through entities, such as S corporations, partnerships, sole proprietorships, etc., may now qualify for a 20% deduction. However, there are limits and phase-outs. For example, if the income is from a service business, such as providing legal, medical, or financial services, the deduction is phased out if the taxpayer’s income is over $157,500 (single), or $315,000 (joint). The phase out is completed and there is no deduction once the taxpayer reaches income of $207,500 (single) or $415,000 (joint).

Corporate taxes are changing the most. The rate of taxation for a C corporation changes from 35% to 21%.

A business may elect to expense property under Section 179 rather than depreciating it over years. The amount of property which could be expensed annually had been $500,000. Now, the limit for expensing is doubled to $1 million each year.

An S Corp shareholder may be an Electing Small Business Trust. Under current law an ESBT beneficiary may not include a non-resident alien as a beneficiary. Now it can.

This increases the desirability for taxpayers to take advantage of the “charitable IRA rollover” which became permanent a couple years ago. Those over age 70 ½ may give up to $100,000 of their IRA each year directly to a charity. Those who choose to do so do not need to take the amount into income.