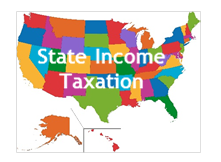 In this article, I’ll explain state income taxation in general.

Everyone knows (or should know) that the federal government taxes the income you earn. But, depending where you live and how you earn money, states may tax your income, too.

States run the gamut in the income taxation of individuals. Seven states don’t tax you at all: Alaska, Florida, Nevada, South Dakota, Texas, Washington, and Wyoming. A couple states, New Hampshire and Tennessee, only tax dividend and interest income. The other 41 states and the District of Columbia all tax individual income at various different rates. Eight states tax income at a flat rate, though they vary regarding personal exemptions for the taxpayer and their dependents. Those states are Colorado, Illinois, Indiana, Massachusetts, Michigan, North Carolina, Pennsylvania, and Utah. The other states have rates varying based on the income of the taxpayer. California wins the dubious distinction of having the highest marginal rate for top income earners at 12.3%, though other states aren’t far behind, especially since they may have local income taxes in addition to the state income tax.

Those wishing to lower their income tax burden might seek to move their residence to a state that does not have a state income tax. Doing so would remove state income taxation. (Of course, if the income is sourced in a state that has an income tax, there might still be a non-resident income tax in the source state.) As prior articles have explained, a trust which is a grantor trust, such as a revocable trust, is taxed to the grantor of the trust. In other words, the income of the grantor trust is taxed on that individual’s tax return just like if they had earned the money themselves. As a result, if they are a resident of a state with an income tax, the worldwide income of a grantor trust is taxed to the grantor without regard to where the income is generated.